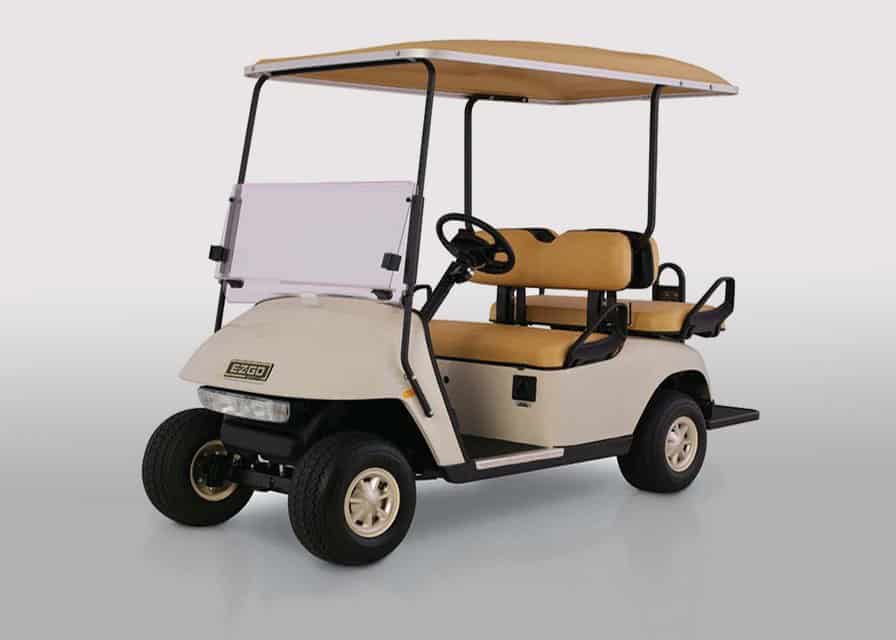 Before making any modifications, buying accessories, or just talking with friends about your golf cart, it’s a good idea to know everything you can about your EzGo Textron golf cart model, including the date it was built.

The EZGo year will be between 1954 to The present as listed on the serial plate, the location of which is noted below. Here are the charts and corresponding date codes that should be all you need to nail down your exact Ez Go year and model golf cart and make it possible to order the correct accessories and repair parts.

EZGO has used several different manufacturer’s codes and serial numbers over the years. Here are some of the earlier years:

Most modern (76-present) EZ-GO golf carts have their Serial Number & Manufacturing Code in or under the passenger side glove box area looking toward the center of the vehicle.

There are three different serial formats used in the models produced after 1976. If there is a letter in the manufacturing code, it represents a month, but not in the Jan=A Feb=B way. The manufacturing month begins in July or August (depending on what year) and so in our examples, an “A” would likely mean July.

In the mid-2000s, E-Z-GO changed the location and format of their vehicle information. They no longer included the manufacturer’s code, and instead of a plate inside the passenger side glove box, they applied a sticker under the choke plate on gas golf carts or under the charger receptacle on electric golf carts. If not in this location there is another place to look. Lift the seat and look toward the back and the differential. Lift the front flap of the black plastic access cover. Behind the flap is a steel frame member running side to side on the golf cart. On this frame member, there is another sticker containing the serial number and other identifying information.

Basically on ALL Ezgo golf carts from 1980 and up will have a 4 digit manufacture date code and a 6 digit serial number.

EZGO RXV golf cart and 2FIVE Low-Speed Vehicle have a number location unique to their models. They both feature a sticker located at the bottom of the steering column. A second sticker is installed underneath the front end. You must get on the ground on the driver’s side of the vehicle and look through the top of the wheel well towards the frame.

If All Else Fails…

The following list is the serial numbers by the year produced:

NOTE: CURRENTLY YOU CAN ONLY LOOK UP 2007 AND NEWER E-Z-GO GOLF CAR SERIAL NUMBERS ONLINE AT THIS LINK

EzGo Models And The Years Produced

All of the carts produced ran on batteries until the year 1971, after which the 175cc model 17-CES 1PG two-cycle Robin version was included in the options.

The earliest Ezgo models were 36-volt electric vehicles. They were three-wheel golf carts and speed was controlled through a coiled resistor.

In 1986 the following models appeared…

Same as Spirit but a 4-passenger.

The basic standard equipped golf car common to many golf courses throughout the world. It has none of the electrical add-ons such as headlights or tail lights, turn signals, or horns.

The E-Z-Go Golf FREEDOM was introduced in 1988 and it has a factory-installed head, tail & brake lights, and an electric horn. It had a standard golf cart body but it had a special black front nose cap that held the recessed headlights and acted as a large bumper. The FREEDOM name continued past 1994. Later a fuel gauge was added. Again, an EZGO Marathon with a custom shell/body.

How To Tune Up Your EZGo-Click Here!

Features a connected seatback, rounded front fenders with a large bumper on the front.
Also has a molded plastic roof with handles
Note: The serial number located in 3 different places on this model. One is placed on the steering column, the 2nd is located on the frame under the front access panel on the driver’s side, and the 3rd is located on the passenger side frame rail at the rear of the cart

Every golf cart manufacturer has its own tagging standard, and it’s handy to have a lookup table to sort out the makes and models. We will continue to keep these references up to date as we get more data and will keep the notes here for reference.